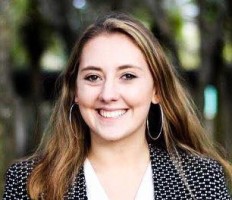 She was dealt a difficult hand in life, having to leave her high school to attend hospital-homebound schooling due to epilepsy. Attending college was a far-away dream until she spent a summer studying at Harvard University. There, she decided, she would strive for higher education despite the challenges her disability would cause.

Masterson will graduate in May, with a degree in marketing as well as five internships and two jobs under her belt. She’s had experience ranging from management to social media to design, and she continues to push herself to learn more. She has already earned seven certifications and plans to expand her skill set even further before graduation.

Aside from her academics and professional development, she has also been heavily involved on campus as a leader in Student Government, Zeta Tau Alpha and Delta Sigma Pi.  She also founded one of USF’s largest organizations, Bulls Against Bullying. During her four years as president, the organization grew from 10 members to several hundred. She took on numerous tasks, planning events, budgeting and marketing, all while working and being a student. It’s clear how passionate Masterson is about the topic of bullying by the fact that she is currently writing a research-based thesis on how marketing can be utilized to prevent and reduce bullying.

She is passionate about community service, too. She has volunteered for five different non-profit organizations and Masterson dreams of opening her own non-profit in the future, aiming to increase awareness of the impact of bullying and change community behaviors.