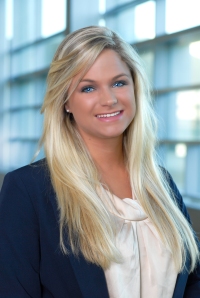 The adage “if you want something done, give it to a busy person” certainly applies to Megan Blizard.  A strong, dedicated, and caring individual, Blizard works part-time, has held several leadership positions in her sorority, juggles two internships, and is enrolled in five classes.

Previously the secretary and president of Zeta Tau Alpha, an 80+ member Panhellenic sorority, Blizard currently serves as the community manager for USF’s Greek Village.  This position allows her to serve as a liaison between the ZTA National Housing Corporation as well as USF Housing.

After her presidency concluded in December 2011, Blizard took advantage of “found” time to serve as an intern for two different organizations.  At Yacht Starship Dining Cruises, she has tackled cross-promotional marketing programs, built a local hotel database, and conducted demographic research.  At the Council on American-Islamic Relations, she has contributed to a variety of marketing and public relations projects to reduce “Islam-phobia” and empower American Muslims, build coalitions that promote justice and mutual understanding.

The marketing and management double-major was recently invited to join Rho Lambda, a leadership honor society for PanHellenic women and has been a member of the Order of Omega, an honor society for the top three percent of Greek students at USF, since January 2011.