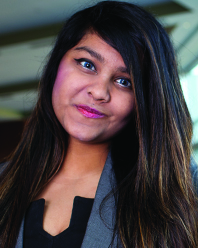 Coming from a society where the expectation of women is to get married and have a family, Anika Hasan aspired to make a name for herself outside of “Mr. Hasan’s daughter.” At USF, as a senator, an honors student, a committee vice chairwoman, a mentor, and a teaching assistant, she has achieved that goal and many more.

Hasan, a native of Bangladesh, has pursued opportunities at the Muma College of Business that have helped her develop professionally, academically, and personally. She is a teaching assistant for a required business and economic statistics course, where she helps grade papers, deliver lectures, and proctor exams. As a USF Student Government Senator, Hasan is also vice chair of the senate committee for appropriations and audit and a primary voting member of another committee. Both are responsible for budgeting $14.6 million of student funds. She attended USF Day at the Capitol in 2014, when students went to Tallahassee to lobby for USF.

Hasan has served the USF community outside of student government by volunteering with philanthropies such as the Urban Scholars Outreach Program, Dance Marathon (Bulls for Kids), and Stampede of Service. She is also chair of the Muma College of Business Student Dean’s Advisory Council.

This summer she will intern for Raymond James Financial in its operational risk and privacy department. Hasan, who is fluent in four languages, hopes to eventually pursue a career on Wall Street.