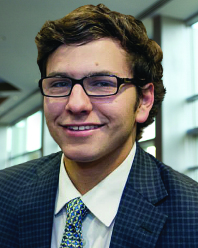 While studying abroad in Qingdao, China, Ryan Gandolfo immersed himself not only in Chinese language but also in the emerging nation’s ancient culture and traditions. Because he had previously lived in Shanghai for two years, his classmates from USF frequently looked to him for help when having trouble during the program. Those experiences shaped his career goals:  he dreams of becoming an influential representative who works to forge strong relationships between the United States and China.

Later, Gandolfo was chosen to participate in the U.S. Japan Council’s Building the TOMODHACHI Generation project, which connects U.S. and Japanese students. This allowed him to collaborate on projects that benefit the Tohoku region, which was devastated by the 2011 earthquake and tsunami, and present the group’s ideas in front of a panel of judges.

Stateside, Gandolfo served as a research intern for Hillsborough County Commissioner Mark Sharpe for a semester in 2013.  That opportunity led to a research assistantship at The Potomac Advocates in Washington, D.C., where he researched Department of Defense budget justifications and prepared Federal Aviation Administration and National Space Security reports for the firm’s clientele.Gandolfo also took classes at The Washington Center.

Gandolfo is a member of Phi Delta Theta Fraternity and Omicron Delta Epsilon International Economics Honor Society.  He serves as a Student Advisory Board member for USF’s Suicide Prevention Campus Project and volunteers for Habitat for Humanity. He participated in builds in the Philippines, Nepal, and in America.