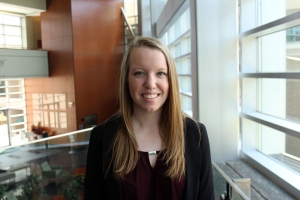 Community involvement isn’t just another requirement to check off for Lindsey Schiller. Even while maintaining her grades, completing internships and participating in student organizations, Schiller makes time to give back to the community, volunteering for organizations such as Relay for Life and the Humane Society.

Going the extra mile is something Schiller does with every aspect of her academic life. She is highly involved with the American Marketing Association (USF-AMA) and has worked her way up to her role as director of communications and brand manager, where she works on initiatives to increase new member retention rate and manages the organization’s social media.

She’s also combined her professional skills and attitude of giving back by becoming a leader of multiple service projects for USF-AMA, such as working with Be the Match to increase the number of people on their National Bone Marrow Registry as well as increasing local awareness of Big Cat Rescue and their mission.

As a freshman, Schiller joined the Bulls Business Community, where she developed professional and leadership skills. In her second year, she became a mentor to first-year students and was elected as the professional development chair. In that role, she organized and planned innovative programs such as its annual Dress for Success fashion show.

She is a natural leader whose motivation has created a foundation for success in the marketing field and has already helped her complete two internships with MOSI and PGT Industries.