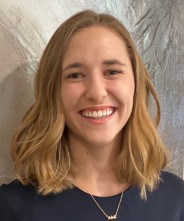 Courtney Powers is a triple-threat: smart, kind and industrious. And she is one of three kids from a family that bleeds green and gold. So much so, in fact, that the USF Alumni Association named them “Family of the Year” in 2018.

She earned her undergraduate degree in management with honors.  And she currently has a 4.0 GPA in the MBA program, earning these grades while working full-time and volunteering in the community.

Powers has a servant’s heart and can often be found helping out behind the scenes at events on campus, such as the Young University Summit, an Open House for potential freshmen and the USF Presidential Investiture Reception.  At each of these events, she served as an informal ambassador for the college. She also helps tutor student-athletes.

At PricewaterhouseCoopers, Powers rose from an intern to a full-time associate on the Big Four firm’s Idea2Innovation team. Due to her strong critical thinking skills and willingness to learn, Powers was able to travel to Boston to represent her team in conducting usability testing for an internal tool that would be rolled out to 50,000 employees nationwide. Though it was new to her, Powers quickly picked up the skills necessary for user interface and user experience design.

PwC leaders know how to spot talent and Powers was recently chosen to be a member of an enablement team which is a cross-functional team focused on tackling and delivering on Controller Operations opportunities through automation.  She was also tasked with coordinating and planning the PwC stage at the Synapse Summit in Tampa.