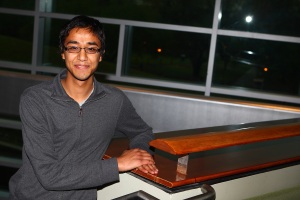 Luqmaan Dawoodjee turned an idea into reality when he founded one of the largest technology and business oriented student organizations at USF.  Passionate about web and graphic design, Dawoodjee co-founded The Web Developer Network, an organization that provides computer science and information systems students with the opportunity to learn programming development and “soft skills” not taught in the classroom.

He took his vision one step further when, after two semesters, Dawoodjee helped WDN grow as an organization and become Createch»The Creative Developers Network.  Now boasting more than 200 active members, Createch» hosts 20+ events each semester, including free seminars and workshops.  Dawoodjee also helped to initiate a partnership between Createch» and the highly-acclaimed Zimmerman Advertising Agency to teach a 13-week series of interactive workshops on graphic and web design.  He is in the process of filing for the company’s production department to become a limited liability company.

Dawoodjee, who is fluent in Spanish and Gujarati, as well as English, volunteers with Project Downtown every Friday where he feeds and socializes with the area’s homeless. He is currently an active member of the executive board and was formerly a public relations officer with the organization.