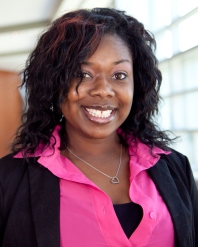 In summer 2011, Shalicia Torbert was chosen out of hundreds of applicants to intern with the Defense Intelligence Agency in Washington, DC, in an eight-week program. Her contributions to the nation’s defense agency didn’t end there. She did so well in the program that she was chosen to work at the United States Central Command at MacDill Air Force Base, where she works part-time as a paid intern with a government clearance. Torbert’s accomplishments extend beyond professional development. As the first person in her family to attend college as a full-time student straight out of high school, Torbert is scheduled to graduate in May. She has also been involved as a leader in organizations across campus. She served as secretary and activities coordinator for the Black Student Association. As part of the organization, she started an annual event for Black History Month, the Gospel Extravaganza at the USF St. Petersburg campus. She is also a member of the National Council for Negro Women which has provided countless opportunities for her to volunteer in the community. In addition, she pays forward the leadership skills she has developed at USF by mentoring incoming freshman as part of the ALANA Mentoring Program.