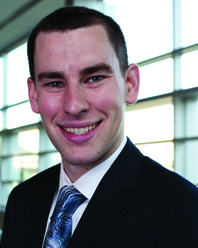 Joseph Nestor knows what it means to face adversity. Despite a healthy past, he experienced a lung collapse three times in two months and had half a lung removed in what he sees as a “defining moment.” The lessons he learned from this moment helped him during stressful times as a student and reminded him of the importance of facing adversity head on, cherishing the support of others, remaining calm during times of duress, and building a diverse support network.

Nestor built that network in the Bulls Business Community, the Business Honors Program, and the Honors College. During his junior and senior years, he was a resident assistant, a job that led to service as vice president of the National Residence Hall Honorary Society. Additionally, he took part in on-campus service events through the Bulls Business Community, which led to his participation on a Bulls Service Break trip to aid homeless people in Washington, D.C.

In 2012, Nestor studied transitional economies in Slovakia and Austria. This inspired him to write his thesis on the behaviors of European bankers in Portugal, Ireland, Italy, Greece, and Spain during the 2008 financial crisis, which helped him understand the Irish economy’s crash, something significant to him as he holds dual citizenship in America and Ireland.

Nestor did all of this while working part-time as a fiscal assistant for USF during his sophomore and junior year. He handled accounts payable tasks, an experience that helped him land a spot in the highly selective JPMorgan Chase Summer Operations Analyst Development Program. In JPMC’s Tampa office, Nestor responded to client inquiries as the bank transitioned to a new reporting system and updated compliance policies and procedures documents.