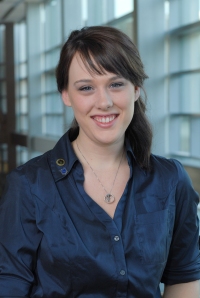 Kristen Keese beams when she tells people that USF’s three-year old student organization, Future Business Leaders of America (Phi Beta Lambda), bested 20+ chapters in Florida when it was recently named the “Chapter of the Year” by the organization’s state office.  Phi Beta Lambda members, who earned 23 awards at the statewide conference, have participated in several community service projects, hosted professional development workshops, and raised funds to assist the March of Dimes.

As president of the organization, Keese launched several initiatives and marketing strategies that increased the nascent organization’s membership and ultimately helped the chapter earn the designation.

A full-time student who has worked part-time through her college career, Keese says that she became a leader in the organization after “learning how to lead” in the Bulls Business Community.  She lived in the living-learning community for two years and participated in improv classes, corporate tours, executive panels, and professional development workshops that help her transform from young student into aspiring business leader.

Aspiring to work in the entertainment industry, Keese has already earned a Certificate in Film Studies and is wrapping up her marketing studies; she will also graduate with a minor in leadership studies.