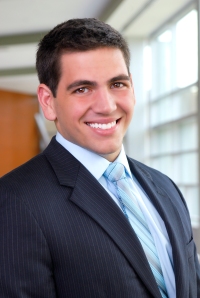 William Halaby hated being labeled an “at risk” child. So much so that, thanks to the Take Stock in Children program, a decade later, Halaby is the first in his family to attend college. He will soon graduate with a bachelor’s degree in finance, a degree he earned while working part-time, serving as an intern at both T. Rowe Price and Jaffe Tilchin Wealth Management, and serving on the Honors College Student Council.

A participant in the College of Business Corporate Mentor Program, Halaby is paired with an executive from Raymond James Financial. He says the opportunity to shadow a senior executive has been invaluable.

Given his understanding of how mentoring can impact one’s life, it is no surprise that the student who is being mentored is also reaching back to be a mentor through Big Brothers Big Sisters of Tampa Bay. He has been matched as a Big Brother for more than a year. He has also served as a guest speaker to at risk youth through the Take Stock program that served him so well.

Halaby serves as president of Delta Chi, leading the social fraternity through a radical culture change. Emphasizing personal development, accountability, and integrity, Halaby has mentored his peers, evidenced by the number of students who are now serving in leadership roles alongside him. In recognition of his success as president, he was selected as a leadership consultant for the national headquarters and will begin his one-year appointment on June 1.